GOSSIP ABOUT SHOWS AND PANTO

Sadly we are not able to stage Kipps as hoped in October.

However, we are pleased to announce that we will be staging a musical variety show which at the moment has the title of

“The Show Must Go On“

. This will include musical numbers performed in the past few years by NADMCS, as well as looking to the future and feature some numbers from other musicals we have yet to produce. We believe this will showcase the talent of our Society as well as demonstrate the potential of the Alexandra Theatre as a live performance venue.

The show will take place in the same week that Kipps was planned at the Alexandra Theatre from Tuesday 4th October to Saturday 8th October 2022 inclusive.

The Society is now in rehearsal for this show. 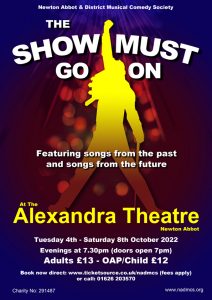 Please note that subscriptions are now due .

Subscription for new or lapsed members will be £25

Subscriptions for non-acting members remains at £10

Any problems with the above information please e-mail-info@nadmcs.org

For information about joining the Society see the NEW MEMBERS page.

IF YOU NEED INFORMATION ABOUT THE FRIENDS of the ALEXANDRA THEATRE  SAVE THE ALEX CAMPAIGNE THEN HERE’S THE LINK TO THE FACEBOOK PAGE.

Here is the NODA roport for Aladdin